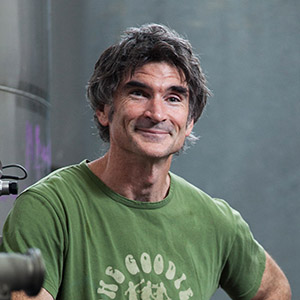 Steve’s first qualification was in food, completing a chef’s apprenticeship in the mid 1980’s. Steve developed a number of culinary passions, including cheese making, which would take him to France to study his trade but it was after working at Château du Bluizard in the Cote de Brouilly that Steve was inspired to become a qualified winemaker.

Steve graduated with a Bachelor of Science (Wine Science) in 1993 from Roseworthy Agricultural College, and in 1994, having maintained his passion for cheese, won a Queen’s Trust Scholarship to study farmhouse cheese making in France. Steve then spent a year working as cheesemaker at Milawa in north eastern Victoria.

As a winemaker, Steve has worked for Leeuwin Estate in the Margaret River (1999 – 2002) and Yarra Burn Winery in the Yarra Valley (2002 – 2003) before joining Giant Steps as Winemaker in August 2003. Steve is a Len Evans Scholar and has completed several vintages overseas, including in Alsace, Provence and Brouilly, and is an experienced wine show judge.

In 2016 Steve was awarded the Australian Gourmet Traveller Magazine Winemaker of the Year award and in 2019 was announced as Wine Communicators Victorian Legend of the Vine.